Serving Electrical Workers for Over a Century 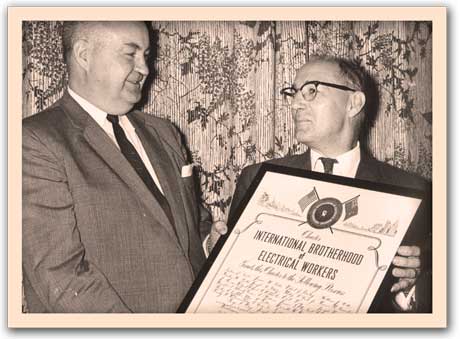 International Brotherhood of Electrical Workers has been striving to reach its goals of improving conditions for electrical workers since 1891, when 10 linemen frustrated with the pay, conditions, and fatalities of the trade, united to form this great union. The IBEW has a long and proud history in Baltimore and throughout the state of Maryland.

Our predecessor, Local 28 was chartered on October 1, 1900, and served the city of Baltimore and surrounding counties until August 1961. Local 24 received its charter on August 27, 1961; the original charter resides in the lobby of the local business office and lists the names of the 27 original charter members.

Local 24 was started with the help of a $25,000 loan from the International Headquarters, which was later repaid. The first business office of Local 24 was located at 225 W. Fayette Street in downtown Baltimore. It later was moved to 115 N. Eutaw Street, and in 1968 to Cross Keys. Our current headquarters building was erected in 1972.

The first referral hall was above the Trailways bus station on Fayette Street. The referral agents at that time were NECA Chapter Manager Andy Reed and NECA Representative Earl Moore. Between August 28 and September 22, 1961, 1007 men were taken into membership. The membership held the first election in September 1961. The following officers were elected:

The first membership meetings were held at the Steelworkers Hall in Dundalk until the construction of our present building in 1972.

We Were Not the First

Local 24 has a satellite office in Salisbury, Maryland, which handles the business of the Eastern Shore counties, from the Bay Bridge all the way to Ocean City. The Eastern Shore at one time had its own Local number, IBEW Local 1835. Local 1835 was chartered on April 2, 1953, and merged with Local 24 on December 1,1966. At the time of the merger, Local 1835 had 110 members.

The Eastern Shore operates under its own collective bargaining agreement.

Local 24 represents quality journeyman sign workers and sign apprentices in the city of Baltimore and surrounding counties.The union sign industry in Baltimore at one time was represented by IBEW Local 250. Chartered on September 1,1963, Local 250 became amalgamated with Local 24 on April 1, 1973. There are currently two sign companies in signed agreement with Local 24.