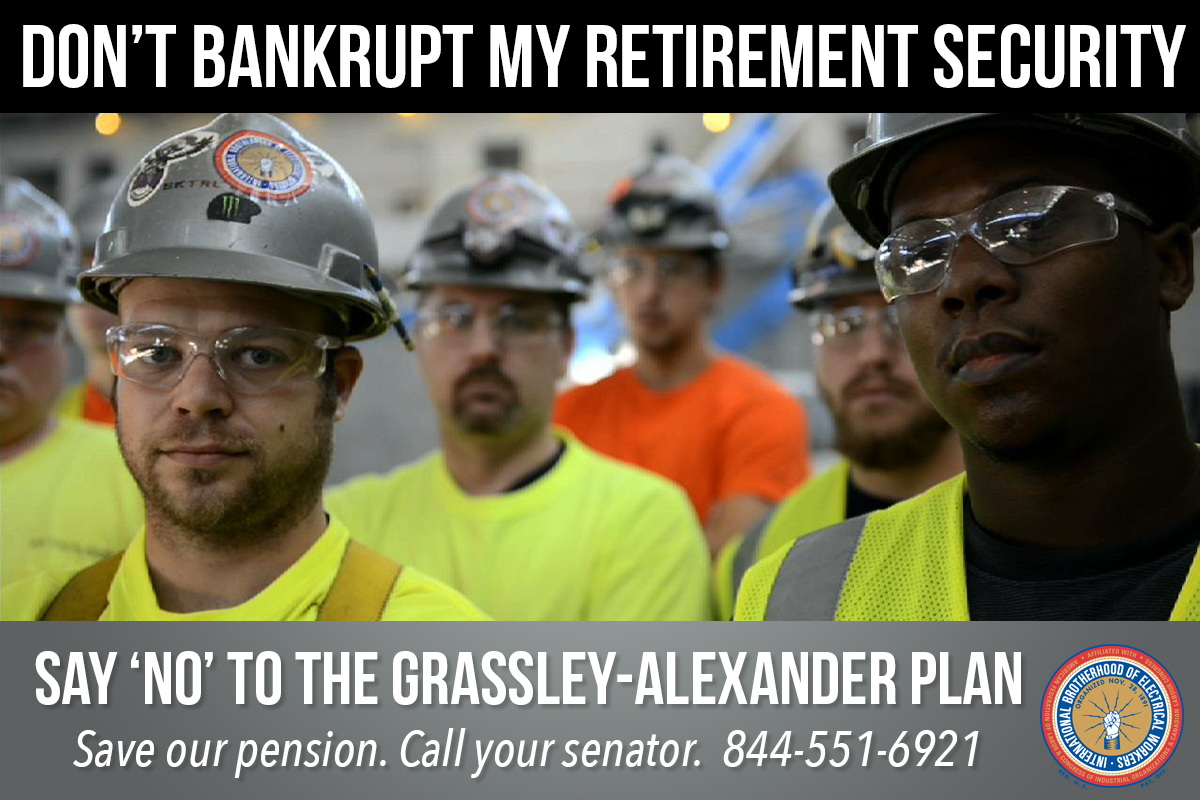 Stephenson: ‘They Are Trying to Kill America’s Multiemployer Pension Plans’

IBEW International President Lonnie R. Stephenson is asking active and retired IBEW members to keep up the pressure on lawmakers to reject a disastrous multiemployer pension plan circulating in the Senate.

The plan, introduced by Chuck Grassley (R-Iowa) and Lamar Alexander (R-Tennessee), is a recipe for the ruin of IBEW multiemployer pension plans, including the National Electrical Benefit Fund.

Members across the country have answered the urgent call since it went out a month ago, with hundreds of calls and meetings at Senate field offices.

“But as long as this proposal is still out there, we are not done,” Stephenson said. “We are not going to rest until this plan is officially dead.”

The white paper, titled the “Multiemployer Pension Recapitalization and Reform Plan,” is a wish list of tenets the conservatives are demanding be included in legislation to reform the multiemployer pension system, which is in crisis due to the imminent insolvency of several large plans. The failure of these plans, including Teamsters’ Central States, could threaten the security of the government insurance program that protects pensioners should their plan become insolvent, the Pension Benefit Guaranty Corporation.

One retiree from Idaho, a 35-year member, sent a letter to Sen. Mike Crapo, explaining that he and his wife – who is also a member – participate in two negotiated multiemployer defined benefit plans.

“These are plans we rely on for most of our retirement security and ours are some of the healthiest of these plans that exist,” said the Pocatello Local 449 member. “Many times, we have taken the responsible steps of increasing contributions to these plans to ensure that they have remained ‘healthy’ — investing in our futures rather than diverting our available monetary resources to wages during our negotiation process with our employer partners.”

HOW BAD IS IT?

Released November 20, 2019, the Grassley-Alexander plan would:

IBEW RESPONSE, BY THE NUMBERS

In-person meetings, telephone calls, emails and letters as well as traditional and social media are being used to get the word out to senators. Here’s a snapshot of what’s happened so far:

WHAT YOU CAN DO

Make the IBEW’s strong opposition to the Grassley-Alexander plan known to lawmakers by: