Calling all big-hearted union members! We are looking for lots of Santa’s helpers to donate unwrapped toys for children from infants to age 16.

The toys will be included in holiday baskets, which are prepared each year by the AFL-CIO Community Services of Central MD. Baskets are given to our fellow union members who are in need and/or suffering financial hardship this Christmas season. Each member will receive a Giant gift card to purchase a ham or turkey along with a basket filled with food. Members with children will receive a gift for each child up to 16 years of age.

Local 24 member Blaine Boone, who is the director of AFL-CIO Community Services of Central MD, said “The toys given to the children of families bring so much joy to those who need it most during the holiday season. And we need your help to ensure that that joy continues this year.”

Community Services is located on the first floor of IBEW Local 24’s building, so if you are coming by the hall for a meeting or referral you can easily drop off your toy donation.

If you don’t get into Baltimore much, please consider buying a toy online and shipping it to:

The Baltimore Electrical JATC is offering the Electrical Vehicle Infrastructure Training Program (EVITP), a 20-hour course for journey-level electricians to get trained and certified to build the United States’ electric vehicle charging system. At a cost of only $85, this option offers significant savings as compared to the course offered on the EVITP website for $275. The Baltimore Electrical JATC certification class is open to any Local 24 JW member who is currently working for a contributing employer, or has been laid off by a contributing employer in the last 12 months. For more information or to enroll, contact the JATC at 410 247-3313.

In a recent letter to business managers, IBEW International President Lonnie R. Stephenson said, “EVITP is a nationally recognized training standard for installing electric vehicle supply equipment, and the federal government is expected to require the training, which it considers essential to the safe long-term operation and maintenance of the electric vehicle charging infrastructure. This advanced skill program builds on the platform of qualified electricians’ extensive knowledge, skills and experience, so EVITP certification is easily accomplished for many IBEW journey-level workers, requiring a short, 20-hour course, available in person at IBEW training centers and online.”

U.S. Trade Representative Katherine Tai, along with her counterpart from the United Kingdom, International Trade Secretary Anne-Marie Trevelyan, met with business and labor leaders at the Port of Baltimore on March 21 to discuss Atlantic trade. Local 24 President Sam Curreri was part of that group, there to be a voice for our members during the roundtable summit.

Discussions over terms of a bilateral trade agreement under consideration between the U.S. and U.K. changed when the Biden administration took over, Curreri said. Talks shifted away from a free trade agreement (FTA) model. An article on Politico predicted that in current negotiations, “Tai will emphasize several key priorities in her discussions with Trevelyan, the senior USTR official said. Those include enhancing labor rights, making workplaces safer, supporting domestic investments, building more competitive workforces…”

Curreri said he was glad to participate in talks representing labor in a global trade setting and cautioned that even industrialized countries like the United States and the United Kingdom need to be mindful of
agreements allowing supply chains that include factories with exploited workers in underdeveloped countries.

According to The Washington Post, “areas that Tai and Trevelyan said they’d work on include:

• Supporting the digitalization of transactions and trading systems

“There are no better folks to sit at the table than folks who negotiate a contract every couple of years,” Curreri said. “I hope I have the opportunity to go back.”

Following the tour, Ambassador Tai noted the important role the Port of Baltimore plays in U.S. commerce and trade policy. She also emphasized how the Bipartisan Infrastructure Law will help the Port of Baltimore, and ensure the United States maintains its global competitive edge.

Portions of this article originally appeared in the most recent edition of the I.B.E.W.’S Building America Back Better Newsletter.

Get your tickets now, for a fun-filled day with your family and your fellow Local 24 members. Our 22nd Annual Family Picnic will be held at Conrad’s Ruth Villa and will feature games and fun activities for all ages and lots of tasty food.

All requests for tickets must be postmarked no later than Monday, July 25, 2022.

If purchasing tickets in person, at the union hall, tickets must be purchased by July 29, 2022.

Credit card payment will be accepted for tickets.

If you have not received your order form in the mail, or you have other questions, please call the Hall at 410 247-5511. 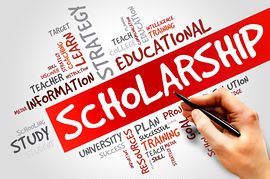 Business Manager Mike McHale is pleased to announce that the IBEW Local 24 Scholarship Fund will again be awarding scholarships this year. Information packages including application forms have been mailed to all active members.

All active members in good standing and their dependents, who are enrolled or will be enrolled in an institution of higher education, are eligible to apply. Scholarship applications must be postmarked before September 1, 2022.

Scholarship winners will be selected randomly from the pool of qualified applicants. This is an equal opportunity scholarship. The award is to be considered without regard to race, gender, religion, age or disability or any other consideration prohibited by law.

Scholarships are not need-based, and applicants do not need to meet a certain income level to qualify for the scholarships.

Please contact Neil Wilford at 410 247-3313 or ibewlocal24scholarships@gmail.com if you have any questions.

Union members worked together across the labor movement to win many important victories for working people last year. We secured historic funding and investment in our nation’s infrastructure, saved our pensions, and unleashed a wave of union organizing.

Passing pro-worker laws will strengthen us at the bargaining table so we can care for ourselves and our families.

Union members need to be talking to each other about the issues so we can work together to advance our shared agenda. That’s why we’re asking: “What do you care about?” Right now, it might be your cost of living, as we all experience skyrocketing prices at the gas station and in the grocery store. The graphic below illustrates some of the factors leading to rising costs, and how a working people’s agenda can help fix them.

You can tell us what your priorities are in less than 5 minutes. Complete the survey and together we can improve the lives of working people across the country!

As an advocate for apprenticeships and a supporter of the IBEW, Rep. Trone has made it a point to tour several of the IBEW/NECA training centers in Maryland. He is a familiar face to the IBEW’s local leaders in and near his district, and has established strong lines of communication with them.

In addition to his notable support of unions and working families, Rep. Trone has prioritized helping families with addiction issues. Visit Congressman Trone’s website to find out more.

Local 24 is proud to welcome ConCor Networks, Inc., an EMCOR company, as our newest signatory contractor. ConCor is an employer that values training, skill and experience. By joining the IBEW family, ConCor has demonstrated that its workforce deserves the excellent pay, comprehensive benefits and safe working conditions that come with IBEW union membership.

Thirty of ConCor Networks, Inc.’s current employees were sworn in at our regular membership meeting on Tuesday, December 28, 2021. Please join us in welcoming our new members and signatory contractor. 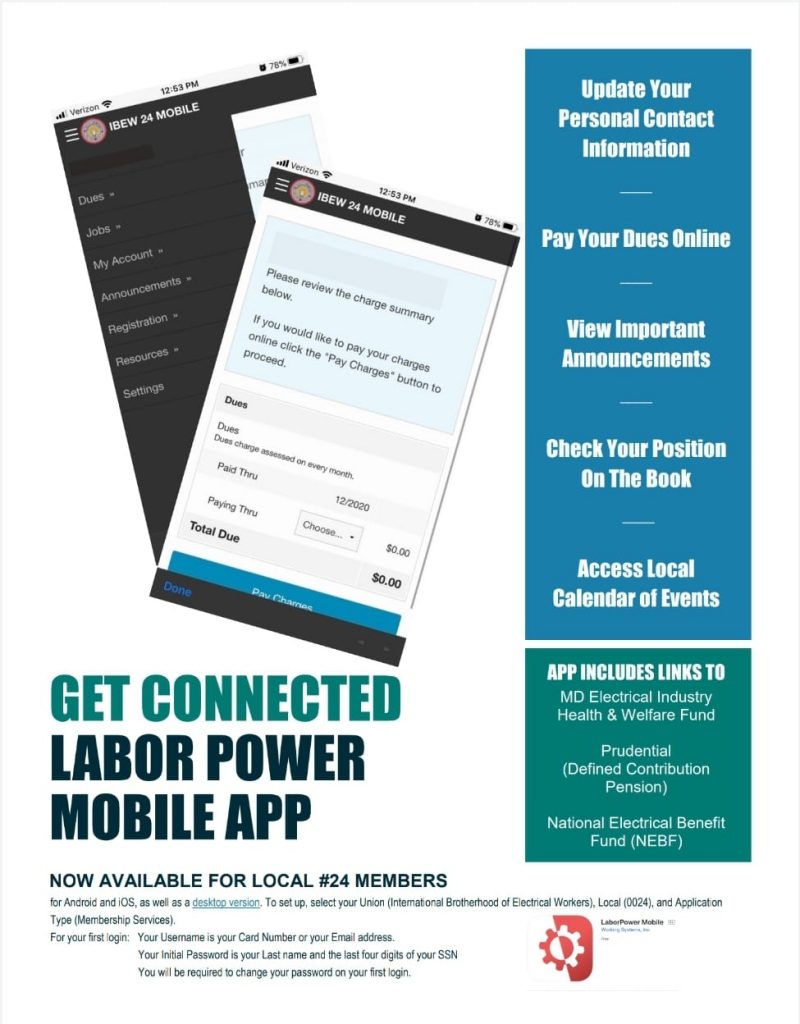 We are delighted to introduce our new mobile app, Labor Power. It is a great tool to make your life easier, and who doesn’t need that these days?
You can update your address and contact information, see announcements and calendar events, pay your dues and more!
Download the app today – it is available for iOs and Android, or it can be accessed from your computer by going to ibew24.workingsystems.com .
For your first login: